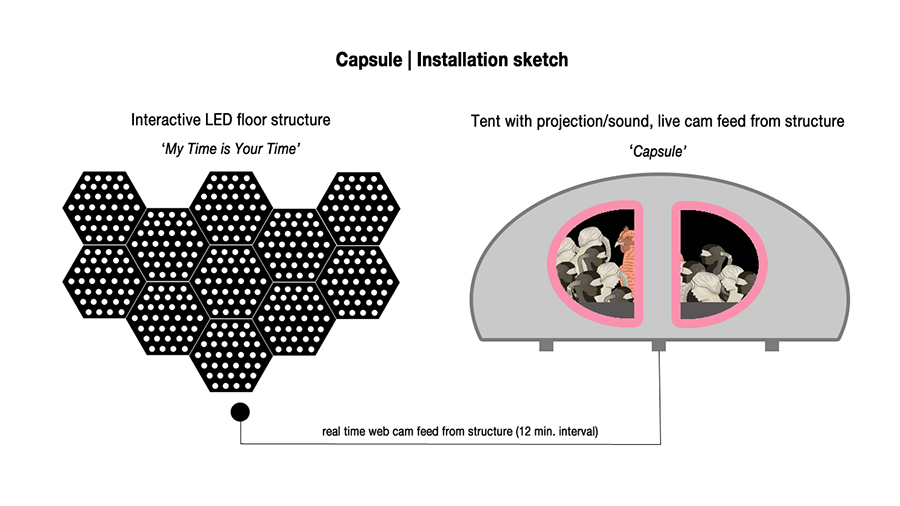 Capsule is an installation piece that explores the concepts of real time and subjective time perception. Different time scales are overlapped in order to collapse any linearity in the narrative structure. Past, present and future become a chaotic flat plane where distant stories of space and time mix with personal time perception narratives of artists and scientists. This temporal polyphony is enhanced with soundscapes from the plasma oscillations from the JET fusion reactor and stellar sonifications from NASA’s Kepler Project.

Capsule consists of two pieces, which are connected via web cam live feed. The capsule – shaped viewing pod derives from a cross section of the torus-shaped JET fusion reactor. Inside the capsule, there is a looped projection of the same titled animation piece, which is occasionally interrupted by a live feed of the second piece titled My Time Is Your Time, which is an interactive light structure, further adding an aspect of ‘real time’.

My Time Is Your Time is an interactive LED light structure that explores the process of energy distribution. The Universe holds a finite amount of energy that cannot be gained nor destroyed, but only redistributed. Here, participants are invited to make their ‘light footprints’ that get fragmented and reshaped by the next person’s interaction, further emphasizing the passage of time and energy as the only thing that is truly timeless.

‘Capsule’ was awarded the Daniel Ford International Prize for Innovation, Central Saint Martins College in 2014 and the 11th Young Artist Biennial Prize in Skopje Macedonia in 2015 resulting with a solo show at the Museum for Contemporary Art in Skopje, Macedonia to be realised in 2016.